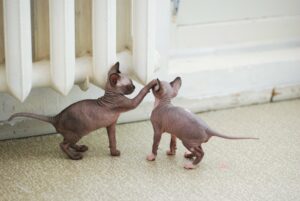 For animal lovers with allergies, having a furry friend can turn into a life or death situation. Allergies to pet saliva and dander are common and can cause severe reactions in sensitive people. Some sources estimate that allergies to dogs or cats affect up to 20% of the global population. Allergies in dogs and cats are more prevalent in people who have other allergies or asthma.

Luckily for cat lovers, there are several breeds that seem to trigger allergy symptoms less than their dander-ridden counterparts. In this post, we’ll briefly discuss the top cat breeds for people with allergies:

Similar to the Siberian, the Balinese cat (and the Javanese, which is a subset of the Balinese breed or its own breed entirely, depending on who you ask) is a favorite among allergy sufferers. The breed is thought to produce lower amounts of the Fel d 1 glycoproteins than most cats. However, the Balinese steps it up a notch by also producing lower amounts of the Fel d 4 glycoproteins – another common allergen culprit. However, scientific evidence confirming these low allergen claims is lacking, although Balinese breeders are also supporting further study.

The Sphynx cat is almost hairless, so they are much less likely to deposit allergen-covered hairs all over your house. However, since some allergens are produced in the cat’s saliva (and then transferred to their skin as they groom themselves), it is still possible to have issues with allergies with a Sphynx cat. Frequent baths and cleaning of the Sphynx cat’s favorite areas can be enough to keep allergies at bay.

Very fine, short fur coats that shed little, paired with fewer grooming needs, make the Bengal cat an excellent candidate for people living with pet allergies. Since Bengals don’t groom themselves as much as the typical house cat, less saliva is deposited on their skin, meaning less chance of allergens being deposited around your house.

Another favorite among allergy sufferers worldwide is the Russian Blue cat. The Russian Blue has a thick, low fur that is thought to trap allergens close to the cat’s skin. Some also believe the Russian Blue produces lower amounts of the Fel d 1 glycoproteins that many other cat breeds. Frequent baths and diligent cleaning will be a must for Russian Blue owners.

With a very short, very fine coat of fur, the Oriental Shorthair cat is known to shed less than most cat breeds and thus spreads fewer allergens around the home. Frequent bathing and grooming can boost these allergy prevention benefits.

The Cornish Rex and Devon Rex cat breeds have long been touted as hypoallergenic, but this isn’t exactly the case. It is true that the Cornish Rex and Devon Rex have very short, unusual fur coats that don’t shed as much as the typical house cat. However, they still produce allergen glycoproteins in their saliva that are deposited on their skin during grooming, so baths, grooming, and cleaning are important for Rex owners with allergies.

Burmese cats have short, dense fur coats and keep their shedding to a minimum, meaning less hair and dander being spread around your home. Their coats are also thought to keep saliva allergens trapped against the skin. But like many of the cat breeds on this list, they still produce allergy-causing glycoproteins in their saliva, so they won’t be suitable for all people.

While Ocicats are thought to produce lower amounts of Fel d 1 glycoproteins, they also shed and produce dander, so they won’t be suitable for all allergy sufferers. We’d suggest visiting a cattery to spend time with Ocicats to find out if you are sensitive.

The Best Care for Your New Cat

Once you’ve found the perfect feline companion that doesn’t make you sneeze and wheeze, bring them to Affordable Pet Hospital for the absolute best veterinary care in Tampa. We’ll keep your furry friends in great shape while giving you tips and lifestyle advice to keep your allergy symptoms at bay. Contact us at (813) 991-9898 to schedule your cat’s first appointment today! 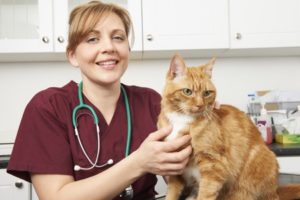 Spaying or neutering your cat is an important element of his or her health. The American Humane Society believes that all cats and dogs adopted from public and private animal care facilities should be spayed or neutered to help prevent pet overpopulation. Considering that nearly 4 million poor animals are euthanized at shelters each year due to a lack of willing adopters, it’s critical for you as a pet owner to do your part to minimize this overpopulation. Since spaying will eliminate the crying and nervous pacing of adult females in heat and undesirable sexual behaviors of male cats, spaying and neutering really is the best choice. END_OF_DOCUMENT_TOKEN_TO_BE_REPLACED 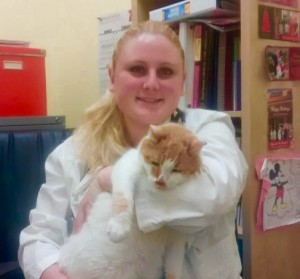 Cats are notoriously curious creatures. This can easily get them into trouble at home. Many household products are toxic and potentially deadly to our feline friends. Keeping an eye out for these common toxins can help keep your furry friend happy and healthy.

Cats are particularly sensitive to both oral and topical insecticide toxins. The most common cause for exposure is when canine products are used on cats: particularly permethrin. NEVER apply medications intended for dogs to cats. Application can cause tremors, seizures and even death. If you cat is ever exposed by accident, immediately wash off the product and bring the pet to the vet.

At home insect traps and sprays can also attract cats. Because cats groom so frequently, it is easy for them to ingest toxins from the home or yard, just by walking through them. Always keep cats away from sprays, powders, or pellets. This also applies to household cleaners. Bleach and other products can cause damage to a cats sensitive mouth or stomach, so allow all products to dry or wipe down with water after use.

Human and other animal medications can pose a threat to cats as well.  Medications like antidepressants and amphetamines (ADD/ADHD medications) can cause neurological symptoms like seizures and panting. They can also cause vomiting, diarrhea, increased temperature, and fast heart rate. Keeping these medications in a safe place away from cats is important. If exposure is suspected, DO NOT WAIT, bring your pet to the vet immediately for hospitalization and monitoring.

Pain relievers, NSAIDs and acetaminophen, are common medications found in almost every household. NSAIDs, like aspirin or ibuprofen, can cause bleeding ulcers in the stomach or intestines. They can also cause kidney failure at relatively low doses. Acetaminophen: Tylenol, can cause drooling, anemia (low red blood cell count), liver failure, and death. NEVER give your pets human or other pet’s medications. Always consult a veterinarian if you suspect your pet has eaten these medications.

Household plants, particularly lilies can cause vomiting and/or diarrhea, depression, and even progress to kidney failure. Be aware before buying house plants of toxic species like the umbrella plant, lily-of-the-valley, poinsettias, etc. Check with your veterinarian if you are unsure.

We always try and protect our pets. By avoiding exposure to toxins we can keep our pets healthy. If exposure occurs it is important to contact your veterinarian IMMEDIATELY for further instruction. If you are unsure if the pet got into anything (finding pills spread on the floor), bring your cat and the medications to the veterinarian ASAP.